Peri Jade Lomax arrived in Hollyoaks along with the rest of the Lomax family in October 2013 Peri's storylines Include a relationship with Tom Cunningham whom see later gives birth to his child Steph Cunningham-Lomax in September 2015 also finding out that Leela Lomax is her actual mother and not her older sister and the arrival of her murderous father Cameron Campbell in 2018 Peri was Involed in a homless storyline that aired in April 2018 and saw the arrival of Harley Frater who later departed just under a year on the show.

One of her biggest plot lines in Hollyoaks is being pregnant at 14. Peri slept with her then-boyfriend Tom Cunningham resulting in Peri becoming pregnant with a girl she names Steph, after Steph Cunningham. Peri originally wants to give up the baby, however when Tom reveals that he loves Steph. Peri later decides to keep the baby. Peri struggled to cope with being a teenage mother so Peri leaves baby Steph on Angela's doorstep.

Peri gets into Prince and Lily's relationship when she goes to bed with Prince. To keep the attention of Prince, Peri fakes a pregnancy. Peri and Prince starts a new relationship but this situation caused a lot of conflicts between Peri and her mother Leela, coming to say that she has lost the baby because of Leela, but the truth is revealed thanks to Goldie, and a furious Leela abandons Peri.

Peri survives in the streets thanks to two young homeless: Dean and Harley. As the days go by, Leela feels more and more repentant, but Peri still thinks that her mother hates her. After the death of Dean, Peri decides to return home, and she wants to stay with her, but suddenly, Harley kiss her.

Relationship with Harley & Being Stalked by Nico

Peri kisses Harley but later tells her it was a mistake. She throws her a birthday party, which Nico goes to without Peri knowing, after stalking her on social media for weeks, because she is jealous of Peri & Harley's relationship. At the party, Harley kisses Hunter in a game of spin the bottle, and Peri gets jealous. Because of this, Harley threatens to leave, but Peri convinces her to stay & they sleep together. The two girls get a job working for Damon & Brody at the pop up cinema. Before locking up one evening, Nico walks in, knocks Harley out and ties her and Peri up. She asks Peri to leave with her so they can be together and raise her baby, but Peri refuses, so Nico leaves, leaving them tied up and locked in the garage. Leela finds them and Harley is rushed to hospital but recovers. Peri tells her how much she loves her and how glad she is to have her. After a small argument, Harley leaves Peri to stay with Ron, who gave her spice while she was on the streets. Peri tells her uncle Ste that she loves Harley and that's why she's so desperate to find her. Ste comforts her and tells her they can keep the soup kitchen open once a week in the hope to find her, but they’ve still not had any luck. 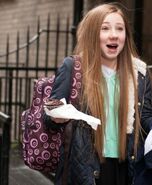 Add a photo to this gallery
Retrieved from "https://hollyoaks.fandom.com/wiki/Peri_Lomax?oldid=64567"
Community content is available under CC-BY-SA unless otherwise noted.