Hit by a car driven by Paul Browning

When Clare originally arrived in 2005 played by Samantha Rowley, she was rather likeable and friendly. However, after the character's recast to Gemma Bissix the following year, the character revealed a dark side and this was quickly revealed around Hollyoaks. Clare became a con-woman, marrying Max Cunningham simply for his money. Clare made several attempts to kill Max, however was unsuccessful

Clare is hired by Max Cunningham and O.B. as The Loft's events supervisor. The two men compete for Clare's attentions and she chooses to be with Max. They keep their romance hidden from O.B. but tell the truth when Clare moves into Max's home. Clare befriends Mandy Richardson and Louise Summers and they help in a time-share scam initiated by Sean Kennedy. He tries to seduce Clare who rebuffs his advances.

When Clare later discovers that Sean Kennedy is wealthy she seduces him. Mel Burton discovers their affair and Clare discredits Mel as an alcoholic. When O.B. becomes concerned she decides to plot against him and ruin his friendship with Max. Tom Cunningham also overhears Clare's deceit and she attempts to alienate Max. Clare is delighted when she becomes engaged to Max but is annoyed to learn he has asked O.B. to be his best man. O.B. discovers that Clare is planning to steal Max's money so she plants drugs on him which results in his arrest. But he manages to invade the wedding resulting in Max attacking him. Clare prevents Max from wanting children by claiming she was abused as a child and infertile. He gives her fifty-thousand pounds and she decides to run away with it. She sleeps with Warren Fox but O.B., Mel, Sophie Burton obtain a DVD of the affair and threaten to show Max. When she learns that Mel and Sophie have been killed In an explosion she decides to remain In the village and steals the DVD from a hospitalised O.B.

Max has a heart attack after taking cocaine and she discovers that he has a life insurance policy worth £500, 000. When he is released from hospital she begins isolating him from his friends. She tampers with his medication to prevent his recovery. He becomes really ill when holidaying with Clare in a secluded location and discovers the truth. Clare locks Tom in her car and tells Max he is drowning in a nearby lake. He attempts to save Tom but cannot find the strength to stay above water. But O.B. arrives to save Max and punches Clare in the face. Clare manages to convince the police of no wrongdoing and Max ends their relationship

Max later tries to strangle Clare when she abducts Tom from his school. While away, Clare tries to sell Max's flat and The Loft. She begins hitting herself in an attempt to frame Max for assault. The police arrive just as Max is forcing Clare out of his home and he is arrested. Max signs his share of The Loft over to Clare so that she will leave him alone. Clare then becomes annoyed with her business partner, Warren and tries to trick Justin into being her accomplice to rid of Warren. She frames Warren for Sean's murder to remove him from the club. Clare convinces Louise to have an abortion and tell fiancé Calvin it was a miscarriage. Clare tells Calvin the truth and Louise attacks Clare. Clare convinces Tom he is responsible for deaths in his family. She then convinces the social services that Max is abusing Tom. She later taunts O.B. over Mel and Sophie's death and he attacks her. Clare is then pushed off a balcony and is hospitalised.

Clare returns to the village to gain revenge on Warren. She takes him hostage and starts a fire at The Loft. Calvin interrupts the situation but Clare convinces him to leave and let Warren die. Hannah Ashworth enters The Loft to stop Clare and a fight ensues. The scuffles results in a banister breaking and them falling to the next floor. Warren Is presumed dead in the fire and Clare Is arrested.

Clare meets Mercedes McQueen In Las Vegas and she claims that her husband, Doctor Browning, has tried to seduce her. They concoct a plan to extort money from Doctor Browning. Clare helps Mercedes fake her disappearance and blackmail him for ransom money. When Mercedes realises that Clare has been lying she decides to stop the scheme. But Clare knocks Mercedes unconscious taking her hostage for real. Jacqui McQueen, manages to get her hands on enough money to pay the ransom, but the bag containing the money is accidentally taken by Leanne Holiday. Claire then lures Doctor Browning to the scrapyard where she is holding Mercedes hostage, knocks him unconscious and places him in the cage next to Mercedes. Browning then makes Claire believe that Tom has the money and attacks Tom but the Police are called and she is taken away.

When she returns, her back story with newcomer, Trevor Royle is revealed, she was pregnant with his baby. Her father Fraser Black was not happy about this so he 'accidentally' pushed Clare off stairs, killing her unborn child.

Clare wants revenge and decides to plant a bomb in The Loft. She invites Mercedes to have her birthday party inside, but when Clare detonates the bomb, a block of council flats blow up instead, killing Ash Kane, Doug Carter  and Leanne Holiday. Trevor Royle had warned Clare about detonating the bomb however she refused to listen, he did this because he was looking out for her best interests. Clare Is then killed when Mercedes McQueen pushes her In front of Paul Browning's car following a fight. 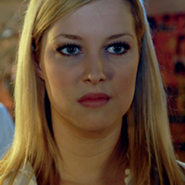 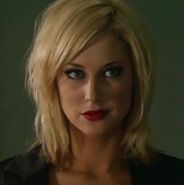 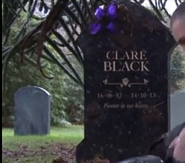 Add a photo to this gallery

Retrieved from "https://hollyoaks.fandom.com/wiki/Clare_Devine?oldid=53064"
Community content is available under CC-BY-SA unless otherwise noted.